Year of the Beaver 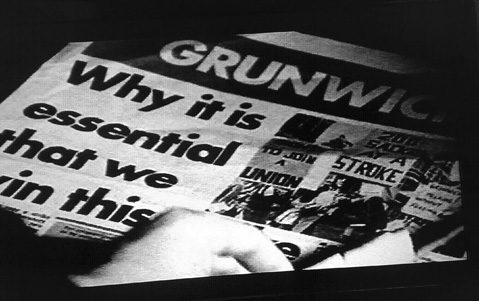 Iniva presents Steve Sprung’s film Year Of The Beaver followed by discussion with the filmmaker, John Akomfrah and Patrick Hazard.

In the summer of 1976, a dispute erupted at the Grunwicks photographic processing plant in Willesden, London. No one could have guessed that the strike would last for two years. The workforce, predominately Asian women, most of whom had only recently arrived in the UK as a result of being expelled from East Africa, were led by their former colleague, Jayaben Desai.  Dismissed by their employer George Ward, these women decided to go on strike over the issue of trade union recognition.

The Grunwick dispute was an important landmark in the history of British industrial action and black workers’ rights, not only in elevating the presence of South Asian women strikers, but also in challenging the British public’s perceptions of this marginalised group.

Year of the Beaver looks at the period from 1976  to 1978, with the Grunwick strike being the central focus of Sprung’s experimental documentary, which charts the role of the unions during the rise of Thatcherism.

Steve Sprung Director/Editor
Steve graduated from St Martin’s School of Art. He was a member of Cinema Action, a leading Independent film group which became one of Channel 4’s first ‘Independent Sector’ workshops, and a member of the Poster Film Collective. He was a founder member of Faction Films which has produced over 30 documentaries for Ch.4, BBC2, LWT and Arte/La Sept. He also collaborated with Lusia Films on several experimental documentaries/fictions for the BBC and Channel 4.

He has worked as a Director, Editor and Cameraman on films which have grappled with major social/political/cultural/philosophical themes, often crossing the borders of Documentary and Fiction in order to find their film voice. As a Director, The Year of the Beaver, an 80min innovative documentary and Men’s Madness, a 60min experimental documentary for Channel 4, are his best known works.

Amongst his most recent works as an Editor are The Outrage, awarded the most innovative documentary prize and Relativity, awarded best short fiction film, at the Berlin International Film Festival.

John Akomfrah Director/Writer
John was educated at local schools in West London and at Portsmouth Polytechnic, where he graduated in Sociology in 1982.

Akomfrah is best known for his work with the London-based media workshop Black Audio Film Collective, which he co-founded in 1982 with the objectives of addressing issues of Black British identity and developing media forms appropriate to this subject matter.

Akomfrah’s work takes a deliberately questioning approach to documentary film. His debut as a director, the controversial and influential Handsworth Songs (1986), reworks documentary conventions to explore the history of the contemporary British black experience: the film won seven international prizes, including the prestigious John Grierson Award. Testament (1988) is a portrait of an African politician forced into exile after a coup d’etat. The emergence of Black Power in Britain is the inspiration for Who Needs A Heart? (1991) and Seven Songs for Malcolm X (1993). A departure from earlier themes, the BFI production Speak Like a Child (1998) is a psychological drama set in Northumberland.

Besides making theatrical films, Akomfrah has directed many television programmes, including one about Martin Luther King for the Reputations series (‘Dr Martin Luther King: Days of Hope’, BBC, tx. 30/7/1997) and another on Louis Armstrong for the BBC arts programme Omnibus (‘The Wonderful World of Louis Armstrong’, BBC, tx. 10/5/1999). A critic as well as a film-maker, Akomfrah has written widely about African cinema. He has been a member of the Arts Council Film Committee, and is currently a BFI Governor.

Admission is free. As places are limited we recommend that you reserve a place by phoning 020 7749 1240 or by email to mailto:bookings@rivingtonplace.org