A talk placing Issa Samb's work in the context of Laboratoire Agit’Art and other African art collectives, exploring the situations and politics that motivated them. 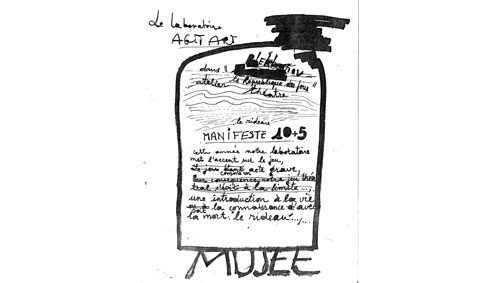 African Art Collectives includes a short presentation by Elvira Dyangani Ose, Curator International Art Tate Modern, placing Issa Samb’s work in the context of Laboratoire Agit’Art and other African art collectives, exploring the situations and politics that motivated them. The presentation is followed by a discussion between Elvira Dyangani Ose and academic TJ Demos on the Marxist ideas that helped produce the Laboritoire Agit’Art as well as other African and non-African artist collectives – bringing an international dimension to projects responding to localised questions.

This ‘in conversation’ follows on from the symposium BMW Tate Live: Experience as Institution – Part 1: Artist collectives and cultural platforms in Africa, staged at Tate Modern in November 2013, which took the example of the Laboratoire Agit-Art founded in Dakar, Senegal, in the 1970s as a case-study to reflect on the current presence of artist collectives and cultural platforms in Africa. For more information on the event, visit the Tate website.

She has developed numerous interdisciplinary projects, focusing on the politics of representation and the role of artists in history-making. Her recent curatorial projects have included two solo exhibitions: the retrospective, Carrie Mae Weems: Social Studies (2010) and the survey show, Nontsikelelo Veleko: Welcome to Paradise (2009); as well as interdisciplinary collective projects, Attempt to Exhaust an African Place (2007-8) and Africalls? (2007). She was the General Curator of the Arte invisible programme – a multidisciplinary project showcasing artists, artist collectives, curators, and other experts in the field, from Africa and the Diaspora – at ARCOmadrid, in 2009 and 2010.

T.J. Demos writes widely on modern and contemporary art and his essays have appeared in journals such as Grey Room, October, Third Text, and Nka. He is also a critic, writing for magazines such as Artforum and Texte zur Kunst. His published work centers broadly on the conjunction of art and politics, examining the ability of artistic practice to invent innovative and experimental strategies that challenge dominant social, political, and economic conventions.

NB. CONCESSIONS – when booking tickets please enter the promotional code Iniva_concession if you are purchasing a student or concession ticket. Proof of ID is required on the door.