Within the etymology of the word retreat is the idea of drawing back, withdrawing or calling back. What does it mean for us to retreat collectively? To come together with others that are also retreating away from our busy lives. – Sepake Angiama, iniva’s Artistic Director

iniva’s Library and Archive Manager, Tavian Hunter briefly reflects on a recent trip to Loophole of Retreat at Venice Biennale with Associates from our Research Network: Archipalegos in Reverse programme.

Earlier this year, iniva discussed the idea of “retreating” as part of our Research Network: Archipelagos of Reverse programme. Taking the time to be a sponge within the micro-climate of Venice and through the support of the European Cultural Foundation, we attended the Loophole of Retreat on 7-9 October. 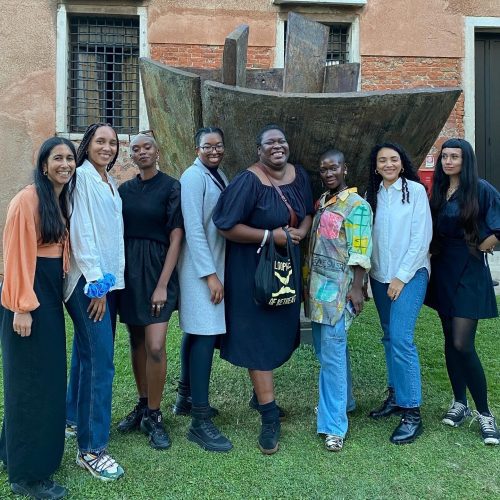 The Loophole of Retreat, a symposium centred on Black women’s intellectual and creative labour features a programme of many incredible talks, performances and films in an atmosphere full of latent potential. With our Research Associates (Adjoa Armah, Cairo Clarke, Rahila Haque, Daniella Rose King, Lola Olufemi and Rose Nordin), iniva convened in Venice not only to listen to the esteemed speakers and engage with their practices but also to listen to our bodies. To gather ourselves and to gather our thoughts.

On Day 1, Rashida Bumbray welcomed us to the Loophole of Retreat by evoking the names of black women whose work land practices have inspired the gathering

Vanessa Agard-Jones then opened the morning presentations with an essay on ‘ground thoughts’. Her research focuses on racialization, environmental degradation and the politics of gender and sexuality. Agard-Jones touched on the traditions of taking ground provisions, the small difference between plants and the body, and mentioned writer Suzanne Cesaire on post plantation freedom.

Artist and founder of New Local Space (NLS), Deborah Anzinger work interrogates the aesthetic syntax that relates us to land and gendered and raced bodies. Her presentation highlighted the practice of several artists including Sasha-Kay Nicole Hinds work on teen pregnancy and reproductive rights in Jamaica and Oneika Russell’s work on black female subjecthood in the Sighting Black Girlhood exhibition at NLS.

Writer and critic Canisia Lubrin beautifully read from several articles from her forthcoming publication Code Noir, a literacy fictional reimagining of King Louis XIV 1685 degree that once governed black lives during the French Colonial empire, to be published in 2023.

Lastly, Mabel O. Wilson who teaches Architecture and Black studies at Columbia University ended the morning presentations by touching on the archives of slavery that “teach very little about the lives of the enslaved people”.

The symposium is guided by directives including: maroonage, manual, magical realism, medicine and sovereignity. On day 2, I spent most of my time watching the films and performances. I was moved by dream hampton’s film on Freshwater (2022) which explored themes of a warming climate, the fluid nature of memory, and the life of Detroiters as the city disappears underwater.

I also enjoyed Paloma Mcgregor’s moving performance work focused on intergenerational migratory storytelling with sounds of the sea juxtaposed against the scenery of the watery docks and fish traps hung on clothes line behind the trees. It touch on both resistance and self-determination.

As we moved into the final day, there was much discussion, listening, and being in the moment together as we recalled the knowledge shared and disseminated through reading, song, music and movement. I took away a vast amount to unpack and a growing list of books to continue to unpick the themes of resistance, black cultural production and self-determination.

Tavian Hunter is Library and Archive Manager of the Stuart Hall Library at Iniva (Institute of International Visual Arts). She is responsible for developing resources on contemporary visual art and artists of the global majority, alongside running a programme of talks and reading groups in Iniva’s Research Network and artist in residency. Tavian has a keen interest in developing diverse library collections, reframing identity and gender in cataloguing subject headings and archival approaches to social justice. She has worked in art libraries, museums, societies, higher education institutions and received her MA in Library and Information Studies from University College London (2015).