Into the archive: a powerful repository of knowledge 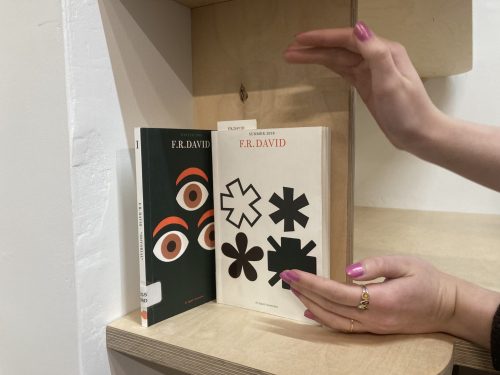 Indra Tincoca reflects on her placement in Stuart Hall Library as part of the Writer in Residence Project for her BA(Hons) Writing for Performance course at The Royal Central School of Speech and Drama.

The beauty of being surrounded by and researching such rich material is that occasionally, you find something that exceeds that material and research interest. By this, I mean something that speaks to a deeper part of you. It is hard to make such a distinction when you are surrounded by iniva’s resources, but the distinction lies in the ‘epiphany value’ that the intense, personal moment of discovery contains. Perched on the third shelf of the Essay and Theory section (towards the end), you will find several volumes of the F.R David Journal (with the spines spelling out the name via its individual letters). At the bottom of the spine lies a small apple. A treat.

What I enjoy most about publications such as F.R David is their capacity to be entirely themselves. It seems too easy to encounter a dominant vein of thought, and experience very little beyond it. We are using the same words, utterances, and grammar. Why is it that I have never noticed the way you have seen this (issue, topic, artwork)? Why have I never seen this? These are questions I ask myself when I converse with F.R David. The more I learn from him, the less I know. Or rather, them. F.R David takes contributions from multiple writers, often working collaboratively on an issue. Reading excerpts from multiple issues feels like an exercise in mental proficiency, often testing me to see if I can keep up with what it is they say.

It is material such as this that I am thankful for as a writer encountering an archive. The word ‘material’ does not have to encompass solely written text such as a journal, or an essay. It can be a zine, a pamphlet or an artwork. Take for example, Ileana Selejan’s ‘Da Da Da & other (e)motions’ in the Media Art Festival exhibition guide. Selejan blurs the boundaries of art and writing through interspersed images amongst phrases. The design of writing plays a large role in the consumption of it, too. Each time I take material from the archive, I am always ready to ask myself ‘Why is it that I have never noticed the way you have seen this?’. Moments in research often overlap, finding a common thread through a common language, at different coordinates in the world.

As I approach the end of my residency, I will work on developing my play, which is the aim of my being in residence. You’ll be able to read it soon and hopefully, you’ll find it in the archive too.

Indra Tincoca is a three year BA(Hons) Writing for Performance course at The Royal Central School of Speech and Drama. Her interests encompass a multitude of the arts, from art galleries and curatorial studies to performance, writing and archives. Much of her work focuses on the representation of Eastern European and Romanian art, bodies, and identity in the Western world.