Artistic representations of Stuart Hall’s notion of the ‘familiar stranger’ 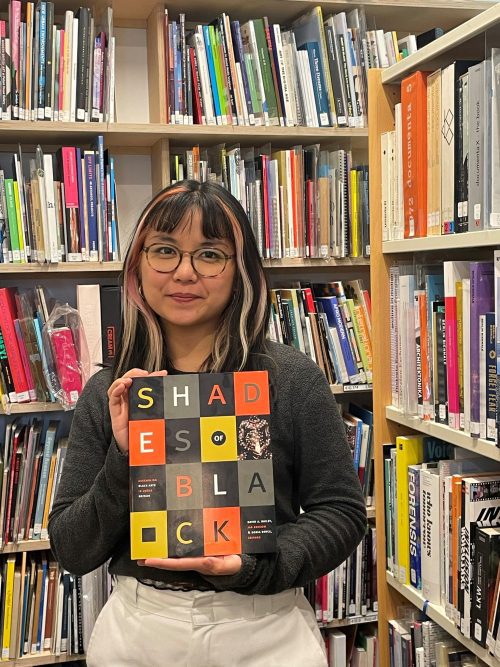 Leda Yang is a current MA in Migration and Diaspora studies Student at SOAS who has completed her placement at iniva. This blog post summarises her reflections on her time in Stuart Hall Library and her personal questions on the emotive construction of spaces for migrated individuals.

During my time at Stuart Hall Library at iniva, I learnt about things somewhat outside of my expectations. I initially thought I would make sense of my fine art education through intersecting with my current anthropology and sociology studies in migration and diaspora. However, what I gained from my placement experience here went beyond that with the focus shifting into deeper understanding of the construction of spaces, specifically the emotional, affective dimension of spaces.

My entering into academic life was somewhat delayed. As a first generation Italian born Chinese woman at the dawn of Chinese economic migration to Italy during the 90s, I didn’t feel entitled to the production of narratives surrounding my identity. Whilst here as a part of my placement for my masters programme at SOAS, I was able to bring together my theoretical understanding of migration and diaspora with practice, being in a space where the conversations around migrant and diasporic states of being is actively generated through the curation of text, art and documentation. Both my degree and placement at Stuart Hall Library has been a gradual exercise in possessing my own entitlement to cultural creation, inside as well as outside of institutions.

I remember one morning I arrived at the library to meet with Assistant Librarian Sae Matsuno, who I had spent almost every Friday with over the course of my placement. She helped expose me to several meaningful perspectives every time we spoke. When putting together a book display for some visiting PhD students from the Royal College of Art I picked up a book containing Olafur Gisladon’s words: ‘The place has a psyche, and the people make the place what is, a cultural space’. This was the same day Sae was talking to me about the “voices” of the spines of the books in the library, “what they are saying” and how they make her feel. It suddenly consolidated for me something which I had been feeling during my time at the library, that I didn’t carry the feeling of antagonism which I did outside the space.

I grew up in Italy, in a young, tightly-knit working-class Chinese community, with little acknowledgment of white European centrality. It often felt as if I could see these dynamics in race, class and gender nobody else around me appeared to notice, creating a deep dissonance between my perception of reality and the accepted reality around me. Being in a space like Stuart Hall Library within iniva has been central to me acknowledging that dissonance and rationalising the missing dialogues of race, displacement and identity within institutions and the public.

This all feels quite personal in many ways. I’ve been in the process of untangling the conceptions of public and private. The rational and the emotional. Cynthia Enloe’s words on the trivialisation of the normative feminine, being the emotional and affective, I have been asking myself what part this has in the formation of power and marginalisation and in what ways does the unexamined and fictitious rationality and professionalism of public spaces have to do with the censoring of marginalised voices. These reflections bring me to understand the ways in which the trivialisation of feelings obstruct conversations around racialisation, migratisation and misogyny.

As well as resonating with Anish Kapoor’s refusal to be a part of ‘The Other Story’ a survey exhibition of Afro-Caribbean, Asian and African artists, I reflect on his subsequent success after rejecting the portrayal of being coded as Asian first and an artist second, closely echoing Frantz Fanon’s sentiments on the freedom in one’s actions being the final determinant of a person. I question whether the stoicism in Kapoor’s act of distancing from an ‘other’ narrative and having an ‘other’ to distance himself from played a part in the reception of his work. For now, these questions largely remained unanswered but acknowledged in a space like iniva and Stuart Hall Library where one’s identity can be central yet peripheral to what one’s made up with. Through this experience, I have been reconciling my own art practice with my identity, and a necessity to recognise identity in a way in which it does not eclipse the individual.

Leda Yang is a London-based artist working in ceramics and drawing, she is completing an MA in Migration and Diaspora Studies at the School of Oriental and African Studies. She is currently researching the significance of subculture and its intersections with migrant identity. Her placement at iniva was part of her studies by bringing theory into life and practice. She hopes to bring together her interests in social studies and arts through autoethnography and working with organisations that create new formations of transnational identities.