My time at Stuart Hall Library 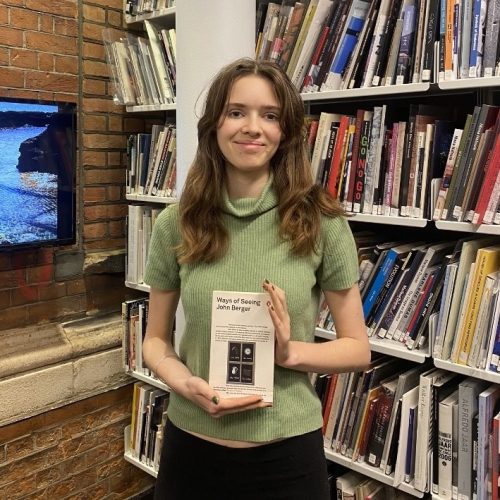 Agnes Perotto-Wills, a Stuart Hall Library volunteer, explores Stuart Hall’s term ‘familiar stranger’ in relation to the migration of Caribbean individuals and the experiences of artists of Caribbean heritage.

Cultural theorist Stuart Hall, in the 2017 edition of his autobiography Familiar Stranger: A Life Between Two Islands, used the term ‘familiar strangers’ to refer to the unique experience of Caribbean migrants who came to Britain in the ‘Windrush generation’ of post-war migration.[1] The term refers to the familiarity of symbols of Britishness, such as the royal family and works of classic British literature as a result of colonial education which engendered a sense of loyalty to Britain, with many West Indians referring to it as the ‘Mother Country’.[2] However, the ‘stranger’ referred to by Hall was visible in the reality that met migrants upon arrival, one vastly different from the utopian England many had been taught to imagine. Caribbean migrants were treated with ignorance and discrimination and quickly realised their ‘familiarity’ with their host culture was very much one-sided, with accounts of British people asking migrants if they ‘spoke English’, or telling them to ‘get back to the jungle’.[3] Further, Caribbean migrants were utilised in ‘race-relations’ sociological discourse, which dichotomised society into an ‘us’ versus ‘them’ narrative, with migrants portrayed as ‘strangers par excellence’.[4]

Iterations of the idea of the ‘familiar stranger’ are visible in migrant memoirs, in fiction, in music and in art.[5] This blog post will explore the latter category, pertinent given the current Tate Britain exhibition ‘Life Between Islands: Caribbean-British Art 1950s – Now’, located next door to iniva’s Stuart Hall Library. We will examine three works of art and attempt to understand how they represent the idea of the ‘familiar stranger’ as referred to by Hall.

Guyanese artist Frank Bowling moved to London in the 1950s, part of the same generation of migrants as Stuart Hall. His painting Mirror is symbolic of the art industry, representing the idea that the career of an artist can ascend as easily as it can descend. The three figures represent Bowling, his wife, and at the top right a figure representing another, more ambiguous part of his identity. Bowling’s work speaks both to the inner workings of the art industry and to a wider notion of the feelings of black British migrants, caught in a liminal, migratory space, here represented by the staircase.

Sonia Boyce, She Ain’t Holding Them Up, She’s Holding On (Some English Rose), 1986

London-born British-Caribbean artist Sonia Boyce’s 1986 painting She Ain’t Holding Them Up, She’s Holding On, reflects Hall’s tension of Caribbean migrants being caught between their country of origin and their new host country. Hall described such a tension as ‘standing at the juncture between a Jamaica to which I wasn’t sure how to belong and an England to which I knew I didn’t belong’.[6] Boyce illustrates this ‘juncture’ in her piece, attempting to hold on to parts of her familial heritage and identity (represented by the four figures at the top, the palm trees in the corner, and the bright patterned background reminiscent of Caribbean interiors), whilst the roses on her dress indicate her relationship to England, though they are uncharacteristically black, suggesting Boyce is representing her identity as a black British woman. Boyce reappropriates the classic term ‘English Rose’ in the title and the painting itself to reveal how migrants combined their heritage with that of their host culture, creating a uniquely ‘black British’ identity.

Finally, evident in migrant’s art works is not only a visual representation of Hall’s ‘familiar stranger’, but also a developing West Indian consciousness, known as ‘creolisation’. Hall and other authors noted that coming to Britain resulted in a realisation of their West Indian identity, a realisation cemented by the 1958 Notting Hill race riots and the subsequent annual tradition of carnival which resulted from them. Author George Lamming wrote ‘we became West Indian in London’.

Grenadian-born painter Denzil Forrester’s work focused on capturing the energy of the reggae and dub scene of late-1970s, early-1980s London. Characterised by bright colours and frenetic compositions, Forrester’s work reveals the development of a West Indian-British culture, revealing the spaces occupied by Caribbean migrants and the intersections of various cultures. This image depicts the iconic dub DJ Jah Shaka, and captures the energy of this particular music scene.

Stuart Hall’s term ‘familiar stranger’ is a useful prism through which to understand the Caribbean migrant experience, and can be applied to a variety of forms of media. The Tate Britain’s current exhibition on Caribbean art provides a number of examples of this term visualised in migrant’s works, representing a sense of feeling stuck between identities, feeling ‘stranger’ to British custom and, in later works, a sign of the growing intertwining of Caribbean and British cultures, as West Indian culture began to influence British in the later twentieth century. Hall’s work, amongst that of the featured artists and relevant scholarly theory, is available to read in Stuart Hall Library.

Agnes Perotto-Wills is a final-year History undergraduate studying at University College London, currently working on a dissertation on medieval gender. She has been volunteering at Stuart Hall Library since August 2021, assisting in selecting and abstracting articles, and creating reading lists. Following her graduation in June 2022, Agnes hopes to undertake museum or gallery internships in New York, Italy, or London, in hopes of a future career in archival or curatorial work.

[2] See Lord Kitchener’s song ‘London is the Place For Me’.

[5] See further reading section for examples of these.

Rahul Patel, The devils feast: an exploration into the African-Caribbean, Asian and African Art in Britain, (London, 2015)
410.111 DEV