News from the North by Emii Alrai 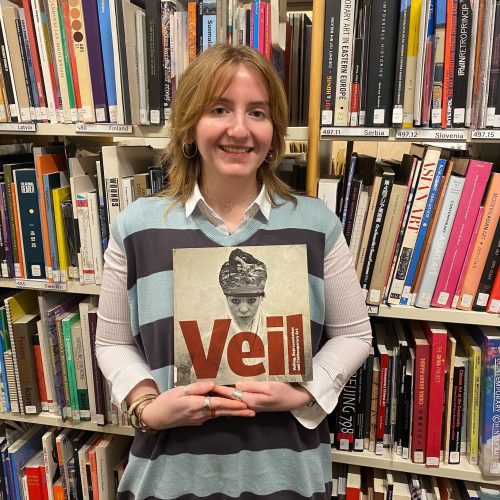 Yasmin Smith reflects on the impact of classification, disengagement with heritage and what it means to be at the forefront of decolonising information with reference to Emii Alrai’s ‘Showcase- A Perpetual Remaking’.

‘Classification, […] although necessary in systems of language, contributes to hierarchies of power: the power to define information and the power to grant or limit access to that information.’[1] (Crystal Vaughn 2018).

My mother, an Israeli immigrant who moved to the UK twenty years ago, never taught me Hebrew as a child. I have always punished her for this choice by neglecting to participate in Sabbath or preferring Christmas over Hanukkah. I did this because I believed being bilingual was the only entry into the culture of my mother. But it is only now, as I am tasked with gathering information for a reading list on Middle Eastern female artists, that I realise the bigger punishment was felt on my behalf. I felt I had punished myself by feeling locked out of my own cultural heritage because I was locked out of a language. My mother’s ease into rituals and celebrations that were based in Hebrew meant that I correlated language with culture and so lost out on both. This realisation, alongside volunteering at the Stuart Hall Library, began a journey into how libraries, with the use of language, can create their own visions of society.

iniva’s Future Collect artist Emii Alrai’s ‘Showcase- A Perpetual Remaking’ touches on some of these topics. It questions colonial practises within museum displays and archaeological sites through her imagery of armatures which ‘assume neutrality yet ensnare, asserting ownership and inflicting colonial violence’.[2] Both of which I link back to ideas on the hoarding of knowledge, and artefacts, from a particularly Western desire for ownership and discovery. I particularly relate this work to the idea that Western explorers would believe their ‘discovery’ of an object is what makes the object valuable. As Curatorial Trainee Amber Li, states, Alrai’s works ‘represent processes of working and experimentation rather than finished outcomes’[3] which is a practice I believe suits spaces of research and knowledge because the information is also unfinished and part of ongoing exploration. Rather than presenting a finished linear model of work, Alrai shows how the unfinished, or left behind spaces of archaeological digs, can become more important and beautiful than the objects taken from them. This metaphor, in and of itself, produces an idea that knowledge should be left where it is discovered, and if that is not possible, it should at least be kept outside the confines of ‘classification and institutional theatricality’.[4]

This approach towards knowledge being kept where it is found highlights the importance of classification within libraries. As shown by the Dewey Decimal system now being regarded as outdated and in favour of colonial view, libraries changing their classification systems is then a powerful way of maintaining an egalitarian view of the world. Presenting knowledge into segregated groups imposes an idea that this is stationary whereas these systems should instead be adaptable and always looking forward to a changing future.

Alrai’s exhibition being within the library space, however, indicates that some libraries can work towards a better vision of sharing knowledge. I believe this to be because a library, at its core, is a space that does not discriminate or cater towards a particular group. This is shown by Alrai’s piece ‘Study for Rice Vessel’ which imagines a creature made from what looks like a vase artefact. I find this piece engaging with my research because it presents malleability within artefacts and thus information. Like information, the ‘Study for Rice Vessel’ is a changing, growing object that is both recognisable and foreign. This resonated with me because it shows how I feel towards my own disconnected heritage; something that I relate to but also feel neglected from.

Similarly, Alrai’s film, Capture (2021), uses dual languages with subtitles and dialogue in French but supplemented with a transcript in English. This makes me think of my own subtitled language, the one that is within me but cannot be spoken. This engagement with heritage and archaeological/ museum practices indicates to me a connection between diasporic individuals who feel removed from their natural homes but are still deeply interlinked to the physical space left behind. All of which link to Vaughan’s statement that ‘classification, […] although necessary in systems of language, contributes to hierarchies of power’.[5] This is because language, in relation to classification, can comprise the identity of those who do not fully engage with Western epistemological inventions.

Accordingly, this blog post explores ways in which libraries can sustain an anti-hierarchical approach to the containment and preservation of information because ‘to remain neutral about these systems is the very opposite of what it means to be a librarian in the twenty-first century’. [6] Through my research, I understand that libraries can use language as a tool to decolonise systems that are still in use elsewhere. Being a volunteer here, I have taken notice of how the Stuart Hall Library achieves this by providing open access to all material and archives on shelves to anyone who may drop in. This is a rare occurrence in research or subject-specific libraries because others display a hierarchy within an educational demographic due to the requirement of a written letter from academics to gain access. Therefore, classification and the general use of language within libraries must remain accessible in order to maintain freedom of knowledge. Therefore, dedication towards a continuation of reflective and honest libraries must uphold a commitment to classification as an ongoing project.

Thus, I believe through noticing how language can be both a tool and a barrier towards a more anti-hierarchical society, librarians can be the agents of change for this future. A future that would be willing to work towards transparency of information and malleability when it comes to updating systems of thought. Conservation of information can itself be classist, sexist and racist, based on Western epistemological values, so we must ensure that diasporic voices have a hand in the discussion and implementation of future classification or aids within libraries to replace those outdated systems that exist. As I hope to reconnect with my heritage by changing my current state of statis, I also hope for a future where knowledge is widely accessible and adaptable to change.

Yasmin Smith is a recent graduate of BA English Literature at Goldsmiths University. She recently volunteered at the Stuart Hall Library and is an aspiring writer and researcher. Her writing usually concerns cultural heritage, the past, and a queering of the modern-day experience.

[5] Vaughn, The Language of Cataloguing: Deconstructing and Decolonising systems of Organisation in Libraries p.2.