Drawing on the expertise of staff at the Iniva and the wealth of resources available in the Stuart Hall Library, I developed an interactive talk focused on South African photography practices with specific analysis of the works of David Goldblatt and Santu Mofokeng. I first learnt about these two prominent South African photographers from different generations during the module Curating Difficult Histories: Museums, Exhibitions, Art Activism, taught by the Professor Annie E. Coombes at the Birkbeck University. 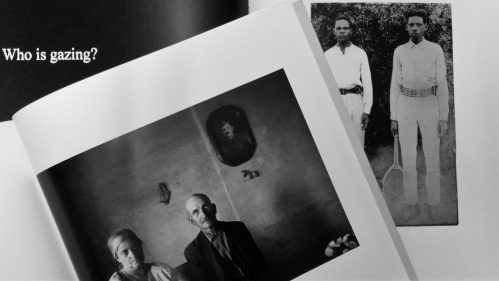 Goldblatt’s Some Afrikaners Photographed and Mofokeng’s Black Photo Album/Look at me, 1890-1950.

REPRESENTATIONS OF IDENTITIES IN SOUTH AFRICA PHOTOGRAPHY
The research and aim of my interactive talk was to analyse “to what extent the practices of Goldblatt and Mofokeng challenged the notions of identity perpetuated by the South African government during the apartheid regime?”. In order to do so, I chose to explore two photographic albums, Goldblatt’s Some Afrikaners Photographed and Mofokeng’s Black Photo Album/Look at me, 1890-1950.

Both Goldblatt and Mofokeng, influenced by different reasons, created a corpus of photographs that sharply contrast the (mis)representations of identities perpetuated by the South African government during the apartheid regime. The South African government preserved a narrative based on the dichotomy between modernity and tradition, associating one with urban spaces and whiteness and the other with rural spaces and blackness. Such a narrative was central to the enactment of restrictive laws that established separated areas between the white minority and the indigenous populations in South Africa, such as the Group Areas Act (1950) and the Bantu Self-Government Act (1959). The same narrative also had consequences in the creation and representation of identities. The apartheid government maintained a colonial visual language within its public displays (museums, galleries, libraries and archives), depicting black communities through an “ethnographic” gaze that privileged to construct the “African continent as a site of both scientific inquiry and popular entertainment”[1].

SOME AFRIKANERS PHOTOGRAPHED, DAVID GOLDBLATT
In Some Afrikaners Photographed, published in 1975, Goldblatt provides us a very personal portrayal of some Afrikaners communities, both from his hometown Randfontein, a mining town close to Johannesburg, and from around the country. Living in close contact with a community of working-class Afrikaners, the photographer states:

“I was strangely affected by some of them, for they seemed to be imbued in great concentration with potent and often contradictory qualities that both moved and disturbed me”. – David Goldblatt (2006)

Those communities, that supported the varying degrees of the enactment of segregating laws, were persuaded by “a deep contempt and fear of blacks”[2]. At the same time, as Goldblatt witnessed, there was “an often comfortable, affectionate, even physical intimacy seldom”[3] between rural and working-class Afrikaners and black South Africans. These contradictory circumstances were well documented in Goldblatt’s photos and may have been one of the reasons for the negative reception/response among the Afrikaners elite towards his published photography. 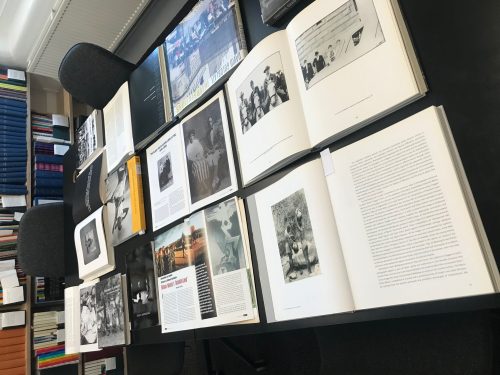 Selection of books about David Goldblatt and Santu Mofokeng

At the time of its publication, Some Afrikaners was ignored by official South African press and seen as an attempt to undermine the (constructed) image of the Afrikaners[4]. An image created by the Afrikaners themselves and derived from a myth based on the purity of the Afrikaans race. As Goldblatt states: “the image that the Afrikaners were looking to find of themselves was of new urban elite taking its (rightful) place among the ˈEuropeanˈ nations of the world – and they were fully prepared to rewrite history and bulldoze their ideological path over the most bizarre of inconsistencies to achieve such an image”[5]. Goldblatt’s Some Afrikaners photographs are focused on farmers and poor white communities; in framing these pictures into his own narrative, the photographer constructs a specific image of (some) Afrikaners, which clearly interferes with the manufacturing of representations during apartheid.

THE BLACK PHOTO ALBUM / LOOK AT ME, 1890 – 1950, SANTU MOFOKENG
Santu Mofokeng’s The Black Photo Album consists of a collection of rediscovered old private photographs taken between 1890 and 1950. The work was displayed for the first time (in its complete form) at the Johannesburg Biennale, in 1997, as a slideshow installation. Mofokeng himself states:

“Officially, black people were frequently depicted in the same visual language as the flora and the fauna, represented as if in their natural habitat, for the collector of natural history; or invariably relegated to the lower orders of the species on occasions when depicted as belonging to the “great family of man” – Santu Mofokeng (2013)

The Black Photo Album responds primarily to this anthropological style of documenting Africans, prevalent during the colonial and apartheid period[6]. In presenting black people dressed up according to Victorian-European style, Mofokeng tries to recreate ideas and representations of identities. Thus, the photographer tries to rewrite and rediscover a history that has been hidden and/or forgotten[7], which is very significant when investigating the historical context of when The Black Photo Album was made, in post-apartheid. Alongside other projects Mofokeng, tries to revaluate private images in an attempt to challenge the depiction of black South African people as well as document their struggles: 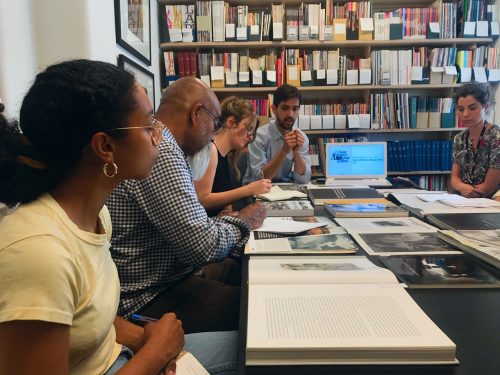 The interactive talk about David Goldblatt and Santu Mofokeng developed in different stages. Initially, focusing on the historical context of apartheid, into a comparative analysis of the actual works and then investigating the contextualisation of representations and creation of identities in South Africa in each photographer’s careers.

The group engagement added very stimulating insights into the debate; varied questions and views enriched the discussion, such as the inclusion/exclusion of some communities into the “official” narrative and the role of private images as a means to revaluate (excluded) people’s histories into the same narrative. A very interesting debate developed in relation to The Black Photo Album: are these images constructed? If so, does this “construction” actually undermine people’s agency and the power/significance of such images? Such questions also brought about discussion into black photographers’ practices in the last century and specifically the role of photo studios in South Africa representing black communities.

I am very thankful to all the participants of the event: their involvement contributed to the success of the talk and, on a personal level, gave me the opportunity to listen to different perspectives and to learn from them. A special thanks to all Iniva staff for their willingness and constant support, in particular to Tavian Hunter and Simina Neagu.

[6] An example of such representation is The Bantu Tribes of South Africa, a collection of photographs by Alfred Martin Duggan-Cronin, published between 1928-1954.

[7] “These solemn images of middle- and working-class black families, crafted according to the styles of Georgian and Victorian portrait painting, portray a class of black people which, according to my education, did not exist at the time they were made”, S. Mofokeng.

For further reading on David Goldblatt and Santu Mofokeng, check out bibliography of resources referred to in the interactive talk available at the Stuart Hall Library. Other text of interest include: Chasing Shadows, Santu Mofokeng, Thirty Years of Photographic Essays, 2011.