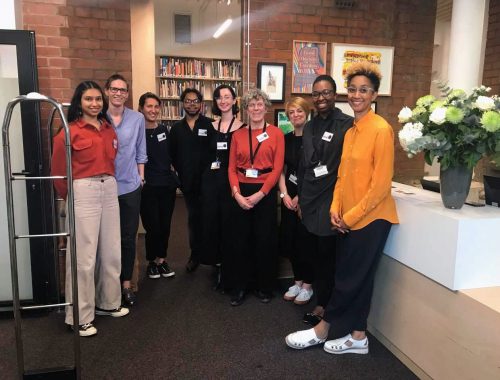 The Iniva team on the eve of the opening of the Stuart Hall Library, May 2019.

25 years ago, Iniva’s arrival was announced at a conference at Tate Gallery (now known as Tate Britain). I attended the conference as a post-graduate student, like many others, pulled along on a tide of excitement and awe about this new player on the scene. This conference on internationalism in the visual arts brought together an illustrious cast of characters, important players in the field of contemporary international visual arts, including Jimmie Durham, Hal Foster, Geeta Kapur and Hou Hanru. I don’t think anyone could have imagined that almost a generation later that Iniva and the Stuart Hall Library would be neighbours with Tate and Chelsea College of Arts.

In Global Visions, an anthology of the papers presented at this conference, we glimpse a world of cosmopolitanism. This book is a provocative critique on notions of internationalism, the role of curatorial practice, the modern museum and art history, particularly in relation to the debates on cultural identity and difference, and the nature of innovation in visual culture at the end of the millennium. This book is a microcosm of the library and it is also an invitation to peer at the world beyond the library walls. When you arrive in our library, and pick up one of our beloved books, you are most definitely transported elsewhere.

Iniva’s move to John Islip Street has been part of a three-year process of re-imagining Iniva for the future. We are so much closer to creating the kind of space that Iniva needs now. With the re-opening of the Stuart Hall Library, we also are closer to achieving our ambition to create a world-class centre for research into contemporary art and culture that gives space to visual art which examines life through the complex lens of race, class and gender.

There are a number of new spaces within the library. We have a quiet reading room, bookable research study spaces and a flexible communal area where visitors can drop in and read our journals, many of which cannot be found elsewhere. Above all, we now have space to expand our library collection and we will work towards completing our dedicated archive space allowing rare materials to be more publicly accessible.

We’re honoured that Professor Stuart Hall gave our unique specialist collection of over 10,000 volumes his name. It is, and will remain, the critical and creative hub of Iniva. It’s an invaluable academic and public resource that we feel very proud to preserve. The work of the library drives our ambition to build a greater body of knowledge around each of the artists with whom we work. This will ensure the legacy of their practices for future generations.

The Stuart Hall Library is open Tuesday – Friday, 10am – 5pm. Join the library and be one of the first to pick up a limited edition library membership card featuring either Larry Achiampong or Jade Montserrat’s artwork.

We look forward to having you visit our new home.