What does it mean when one speaks in an opaque language?

The construction of ‘experience’ in art has been closely explored through the concepts of ‘rasa’,  ‘sensation’, ‘affect’ etc. in philosophical enquiry across the globe which have given rise to the question that informs my current research – the role of the ‘literal’ object and the objectified ‘letter’ in contemporary art practices.

Outside the Serpentine Gallery, presently sits a newly commissioned work by Fischli and Weiss titled ‘Rock on Top of Another Rock’. The work is essentially that – one boulder balancing precariously on another boulder on the ground. The work at once strikes the nail on its head and is the experience of precariousness itself. At the same time, it also confronts the art ‘reader’ (and here I address all acts of experiencing as acts of ‘reading’ ) with the challenge of trying to see the subtlety and humour of the work without falling prey to an urge to over-interpret. 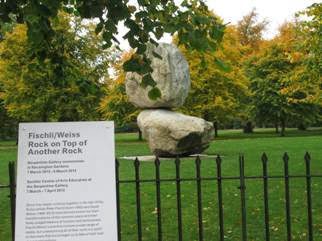 The Dhvani theory ( dhvani can be loosely translated as ‘resonance’) or the theory of Suggestion, one of the several linguistic theories in Indian aesthetic philosophy, emphasizes on reading and receiving language through multiple levels of interpretation. At the same time it puts emphasis on expressing emotions through material symbolism i.e referring to concrete objects in the world to convey an abstract expression. The landscape poetry in Tamil Sangam Literature is an instance of highly charged symbolism where the landscape becomes the expression of the state of mind.The ‘literal’ somehow finds itself at this strange crossroads of explicit and implicit communication.

where cranes part the water lilies

then fly away to stay

near my lover’s village washed by the sea.

His love for me
is greater than the sea.

Meanwhile, a challenge to this notion of objectified experience comes from the proponents of Concrete Poetry beginning with Swiss poet Eugene Gomringer (Constellations, 1953) and the Noigandres group of poets in Brazil – Haroldo de Campos, Décio Pignatari and Augusto de Campos who published the Concrete Poetry manifesto (“I Exposição Nacional de Arte Concreta” in the Museu de Arte Moderna of São Paulo, 1956) which begins thus.

“Concrete poetry begins by assuming a total responsibility before language: accepting the premise of the historical idiom as the indispensable nucleus of communication, it refuses to absorb words as mere indifferent vehicles, without life, without personality without history – tabu-tombs in which convention insist on burying the idea.”

Here the words turned into materials to make visual/sensorial experiences out of them, and ‘they became beautiful simply because they are what they are’; an inversion of linguistic role-play and a tendency towards a more universal poetry where form and content collapse into each other.

These two contrapuntal impulses frame a contemporary condition where art vocabulary takes recourse to the ‘material’ once again. This could be a symptom of globalization as an inevitable precursor for most cultural processes today and the circulation of geo-global artists in the international sphere. The artist has emerged also as a cultural translator but is the medium she chooses to express her art also implicated in this new role-play?

Some thoughts on the Research Network Meeting @ the Stuart Hall Library

I am thankful for the rich discussion generated at the Research Network meeting in conversation with Sunil Gupta on invitation from Roshini Kempadoo. The evening had several inter-disciplinary points of entry. This included personal insights from anecdotal recollections and reflections of the activist art worker’s role in present times by Sunil Gupta as well as suggestions and ideas from artists, researchers and practitioners in the field of philosophy, global arts and cultural studies present during the evening. I noticed an emphasis in general on the practice of art as a cultural activator of relations and a larger concern around the anomalies and differences that exist in terms of vocabularies in contemporary art language and the difference in the nature of infra-structure and institutional frameworks for the arts in the Indian contexts as compared to the local context in London, something to ponder upon despite the blanket effect of a term like globalization that exists as a discourse predominantly in locations already in its grip.

Srajana Kaikini is a writer, curator and researcher working with the spoken and written word, Indian literary theories – rasa dhvani, architectural urban spaces and aesthetics. She is the third Delfina Foundation Research Fellow, in partnership with the Foundation for Indian Contemporary Art, Iniva and Goldsmiths College (Department of Visual Cultures).

For more information about the Stuart Hall Library Research Network, email us.