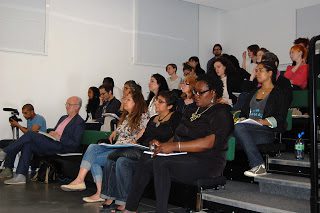 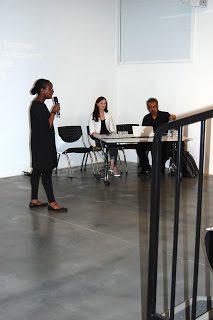 The Trouble With Research symposium held for the first time June 27th 2013, acted as a dimension to the SHL Research Network meetings Sonia Hope and I had co-convened and as a culmination of the work by the first SHL Animateur. The day was packed from 12:00 – 6:00, with some 12 contributions by artists, critics and researchers. As with the SHL Research Network our intention was to explore/expose the kinds of research involved for the artist, the scholar undertaking written research; the critic; and the cultural activist. The intention too was to frame the conversation within the context of Stuart Hall’s writings, cultural politics and modes of reflecting, thinking and creating cultural work.

Three elements were important to conceptualising the symposium.

The first was to consider perspective and place. This is to consciously consider our own projects, here in London as a metropolitan centre of Europe, from within the context of the international frame – if only to be reminded of our own perspectives and positions from which we speak. A dialogue between Christopher Cozier – an international artist, curator and cultural activist – and I became the starting point for the symposium. He was able to speak cogently about some of the ‘trouble’ associated with being construed as a Trinidadian/Caribbean artist by curators working internationally. Christopher also presented the importance of thinking beyond and through conceptual frames of identity and self, which also includes the use of technologies as a practice of self-determination, self-articulation and autonomy.

The second element was to consider the context of the present moment as Hall so often reminds us. In other words to consider the contemporary and current neoliberal regime we all work within as cultural producers. ‘Neoliberal ideas’ Hall, Massey and Rustin remind us ‘have sedimented into the western imaginary and become embedded in popular “common sense”’ to include “naturalised” economic theory of the free market; continued corporate ownership of the media; ‘competitive individualism’, ‘commercialisation of “identity” and the utopias of self-sufficiency (Hall, Massey, Rustin, 2013, 17 – 19). ‘ To this end our panel Cultural interventions in neoliberal times was concerned with the notion of autonomous thinking, cultural projects, technologies and activism. This included Ashwani Sharma’s proposed concept of subtraction of blackness as integral to his notes for a manifesto associated with futurism and Michael Berrie’s paper Dot-art (.art) detailing ways in which imminent internet domain development will affect us as artists/researchers. 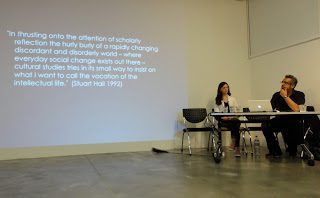 And lastly the third element was to consider the production and practice of knowledge as artists and cultural researchers. I/we wanted us to consider research process, art objects and histories as central foundations for cultural knowledge and cultural politics. It is I argue, only through our knowledge of what has gone on before that we might create radical and highly imaginary projects in the present and future. To this end, contributions included Kabe Wilson’s creative storytelling art object that re-frames and re-tells a story embedded with a knowledge and history of the black power movement using Virginia Woolf’s writings; and we heard of Tahera Aziz’s sound installation [re]locate that sonically re-imagined the documentation from the Stephen Lawrence murder and subsequent enquiry. Set within the context of the Stuart Hall Library and Iniva, the contributions continue a legacy of the library, the archive and the building itself as art objects/media that socially intervene and contribute to socially and politically astute knowledge and experience. Kabe Wilson’s ‘Olivia N’Gowfri – Of One Woman or So’, assembled from Virginia Woolf’s A Room of One’s Own and rearranged to write a new novel. Photograph credit: Karen Roswell

We ended the day in conversation with Ashwani Sharma and Layal Ftouni – to provide a focus on the continued Arab protest and uprisings and more specifically Lebanon, focusing on ways in which Arab/Middle Eastern artists provided other ways to provoke debate, thought and action.

For all those who attended and contributed – A Big Thank You.

From the feedback and what I saw and heard there is great value in forming a network – a body of people who feel some sense of being, of coming together and exploring each other’s work and perspectives. Most folk ‘felt’ the building and the Stuart Hall Library as the appropriate space – physically and metaphorically to continue to focus on the dialogue and conversations necessary for us. 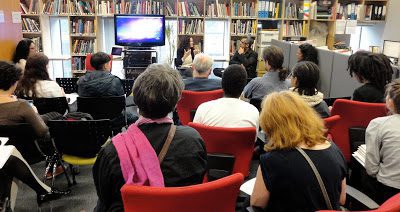 The SHL Animateur role, which now comes to an end, provided an opportune moment to explore and become familiar with contemporary visual work and get a sense of the depth of research entailed in creating, exploring, critiquing and examining current projects. Our thoughts for coming years and the future are to continue the Research Network – beginning again in the autumn.

To think and act autonomously – independent of political and cultural pressures that conform to an agenda of economics and current politics – and yet collectively sustain and develop new ways of thinking and acting is not easy and requires much effort. I feel confident that we are teaching and reminding ourselves of just what it will take to continue practising as good scholars, artists and critics who have valuable contributions to make to the present and the future.