What may well become a valuable core group of researchers and artists, formed the Stuart Hall Library Research Network session on 28th February (2013) night to reflect on Jessica Carden’s study and Saer Maty Ba’s contribution of three contemporary black-british filmmakers who use the Arctic landscape as a space to discuss issues of race, migration and belonging. Their research was insightful and rigorous, critically exploring the filmmakers work (John Akomfrah, Isaac Julien and Grace Ndiritu). 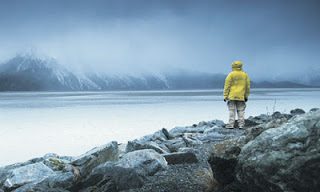 Speaking of explorations of aesthetics and questions of location and space, I also contributed to a session in January to students from Slade School of Fine Art that Erika Tan arranged looking at the work of iniva and the library. In amongst other things I showed the work by Chris Cozier who is currently showing at David Krut Projects Gallery, New York (until March 16th). Chris as an artist, curator, writer and critic has started an online forum around his work with patterned concrete bricks.One aspect we discussed was the question of why now  – why in the last decade or so, have films such as these been made making use of the physical and symbolic landscape of the north? In what ways do the films at this moment in time, reflect a European political climate of anxiety and tension – including climates changes and threats, of the perceived ‘problem’ of southern populations moving north, of the political state space of retreat, aggression and violence towards women and southern bodies from the majority world. The extract from The Nine Muses (2010) directed by Akomfrah, spectacularly seductive in form and aesthetics also prompted a series of questions around the institutional and aesthetics of film production – such as the relationship between historical archive footage and crystal clear and highly improved camera/screen-based technologies. So a exploratory but animated debate that provided me with much more insight into how we might consider such filmmaking.

Concrete bricks I hear you say – well most of us are familiar with these things – these bricks that act as ventilation in concrete houses in tropical spaces – found in verandahs, at the top of walls – often painted in contrast to the colours of baby blue, or intense pink we have come to associate with ‘modern’ concrete houses built whether in Ghana, Trinidad or Malaysia.  They are redolent of something more – of tropicalisation, of a the familiar architectural stuff of the South, they speak of materiality and modernity – something mass produced and evoking ‘development’ as Cozier’s title suggests. 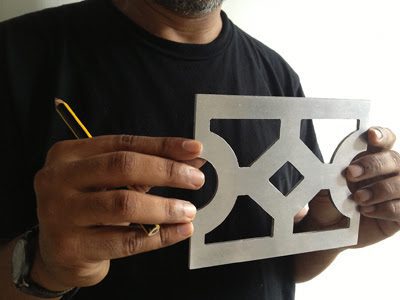 There are some interesting contributions so far – of artworks as photographs, illustrations, animated gifs, spray painted interventions, proposals for a Caribbean and videos. See:

Some References found in the library and elsewhere about the artists below: