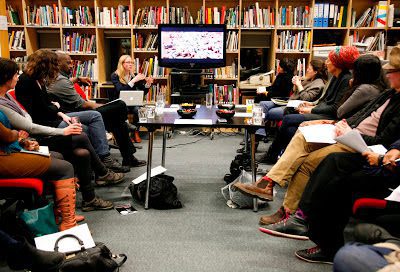 Thanks to all those who attended the first Research Network meeting at Stuart Hall Library. We had a great turn out of interested students, curators, academics and other curious visitors who listened to, then engaged enthusiastically with the presentations by Karinna Gulias and Kim Bagley. 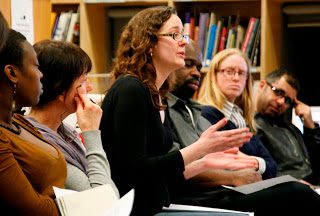 Karinna discussed her ‘Avoiding an epistemological approach to reading poetry’, demonstrating her method by presenting a close reading of Rainer Maria Rilke’s A Woman’s Fate, translated by Stephen Cohn.  The discussion raised issues relating to the processes of translation and interpretation, as well as the difficulty of placing language and meaning out of ‘context’.

Ceramicist Kim Bagley’s presentation of her work in progress, ‘Africa and the West: a contested conversation in modern contemporary ceramics’ focused on the ‘extermination tents which sprung from observing a specific local extermination method …which resonate with draped construction sites, tent cities and refugee camps…’ in Durban, South Africa. Group members enjoyed seeing examples of Kim’s work, both during the presentation and also by handling small versions of the works, being able to examine the shape and texture. The discussion of Kim’s work was far-ranging, including concepts of the local and global as evidenced in the title of her presentation which used ‘Africa’ rather than the more local ‘South Africa’. 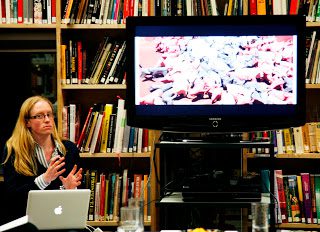 The Stuart Hall Library Research Network is a meeting place for discussion of practice-based or more conventional forms of research that may include: curatorial practice; visual arts; global art; film and media; cultural studies; cultural activism; postcolonial studies; literary studies, including criticism and theory.Next meeting: Thursday 28 February 2013, 6.30-8.30For more information and to submit a proposal to present at a future meeting, email Sonia Hope and Roshini Kempadoo (The first Stuart Hall Library Animateur) at  library@iniva.org